by Jean-Luc Lasquellec
in Smart contract

What is a Smart contract?

“It is a contract whose clauses are written in computer language, and this contract is deployed on the blockchain”

If the conditions provided are met, THEN the clauses are executed automatically.

In this webinar organized in February 2019, I received Damien Bavarel co-founder of youandblockchain who explains how smart contracts work. Raphäl LACAM was the moderator of the webinar. Raphaël is a member of https://kryptosphere.org/ from Marseille. 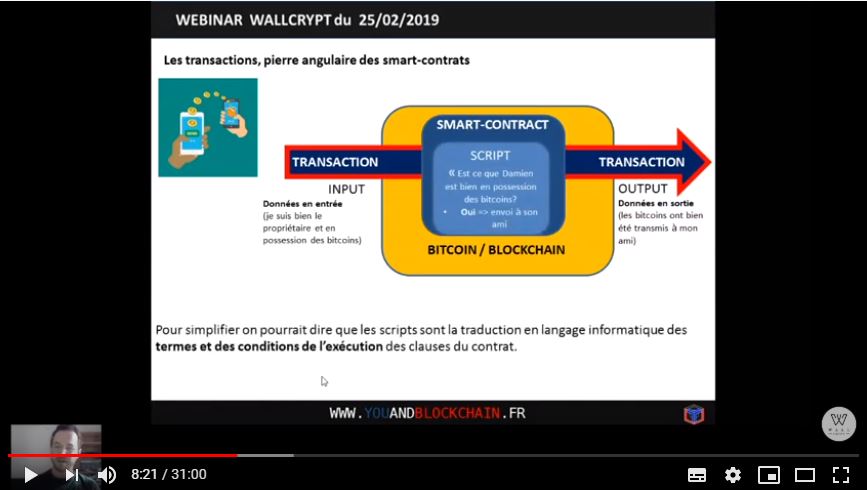 Nick Szabo is a computer scientist, lawyer and cryptographer known for his research on digital contracts and digital currency. He graduated from the University of Washington in 1989 with a degree in computer science.

The expression and concept of “smart contracts” were developed by Szabo with the aim of bringing what he calls “highly advanced” practices in contract law, from the conception to the application of the protocols of electronic commerce between strangers on the Internet. Smart contracts are a major feature of cryptocurrencies and the E programming language.

Vocabulary used in the smart contract

Electronic notarization is the certification of the various stages in the evolution of an electronic document with a view to: during an exchange between two parties, it is possible to guarantee the content, origin, date and destination of an electronic message . Wikipedia source

The Pay-to-Public-Key–Hash script is the basic form of making a transaction and is the most common form of transaction on the Bitcoin network. Source Cryptocompare

Bitcoin could potentially provide many more services, for example offering control of distributed storage thanks to its time stamping capacity. It could be used to certify a large number of data, thanks in particular to the OP-Return function, which allows you to insert 256 bits of free characters in addition to a transaction (i.e. a hash). source le senat

computer application that runs on a distributed computer system. DApps have been popularized by distributed ledger technologies such as Ethereum Blockchain, where DApps are often called smart contracts. Wikipedia source

I remain at your disposal.

How to store your bitcoins on paper?

The power of positive thinking

No Result
View All Result